Kiwitahi is a rural primary school in Waikato, New Zealand. The school is in the dairy farming heartland of the North Island, with the majority of pupils coming from farming families. There are 41 children currently on roll, with numbers forecast to grow later this year. The school is state funded, providing a quality 21st-century education through a friendly, family-orientated environment.

Nick Jensen joined the school as Principal in October 2019 after spending time teaching in England. At that point, the school operated two full-time classrooms – a senior classroom for Years 3 to 6 and a junior classroom for new entrants and Years 1 and 2. One of his first actions on joining was to introduce a new system of assessment in the school, so that he and the teaching team could get a better overall picture of their students’ abilities, attainment and any barriers to learning.

If you can’t get your school to be a place where the kids feel safe and happy, you’re doomed to failure – so you have to address the children’s attitudes to school, first and foremost.

While standardised testing in primary schools is optional in New Zealand, there are some recommended tests that schools can use if they choose. Nick tells us more: “I’ve never found these tests particularly useful, they’re all paper-based and involve a lot of teacher time in marking. We really don’t get much depth of information from them.

"So I knew that we were looking for something new that would allow us to capture accurate baseline information on each child, that would be data-driven and have as little teacher bias as possible. Teacher judgement is, of course, really important – but it’s very easy to become blinkered or to think that you can see something when actually what you’re seeing could be quite different – particularly when it comes to student wellbeing. I’d experienced GL Education’s assessments being used at my previous school and they worked really well – so I was keen to utilise them when I arrived here."

The school began to use GL Education’s Cognitive Abilities Test (CAT4), the Pupil Attitudes to Self and School (PASS) survey, and the New Group Reading Test (NGRT).

Nick explains: “We started by using CAT4 – for the teachers, this was completely new. They were genuinely interested in what the data could show us and to see how the children would compare to other students around the world.

"The results that we got were really interesting – but I wouldn’t say that there were many surprises with the data, which was really good to see as it told us that our teacher judgements were robust.

"We then did our first PASS survey later that term (Term 4 2019), to allow us to look in detail at our students’ feelings about school, self-regard, attitudes to teachers, confidence in learning etc. This would give us really good insights into their attitudes and mindsets.

"After that initial survey, we carried out further PASS surveys in Terms 2 and 4 of 2020. Being a rural school, we are really affected by a lot of roll change – with new pupils often joining the school mid-year, reflecting the start date of new farming contracts in the surrounding area. In 2020, more than 50% of the school roll changed on 1st June, so that was a big change. We were keen therefore to look into each student’s PASS results to reveal any hidden barriers to their learning." 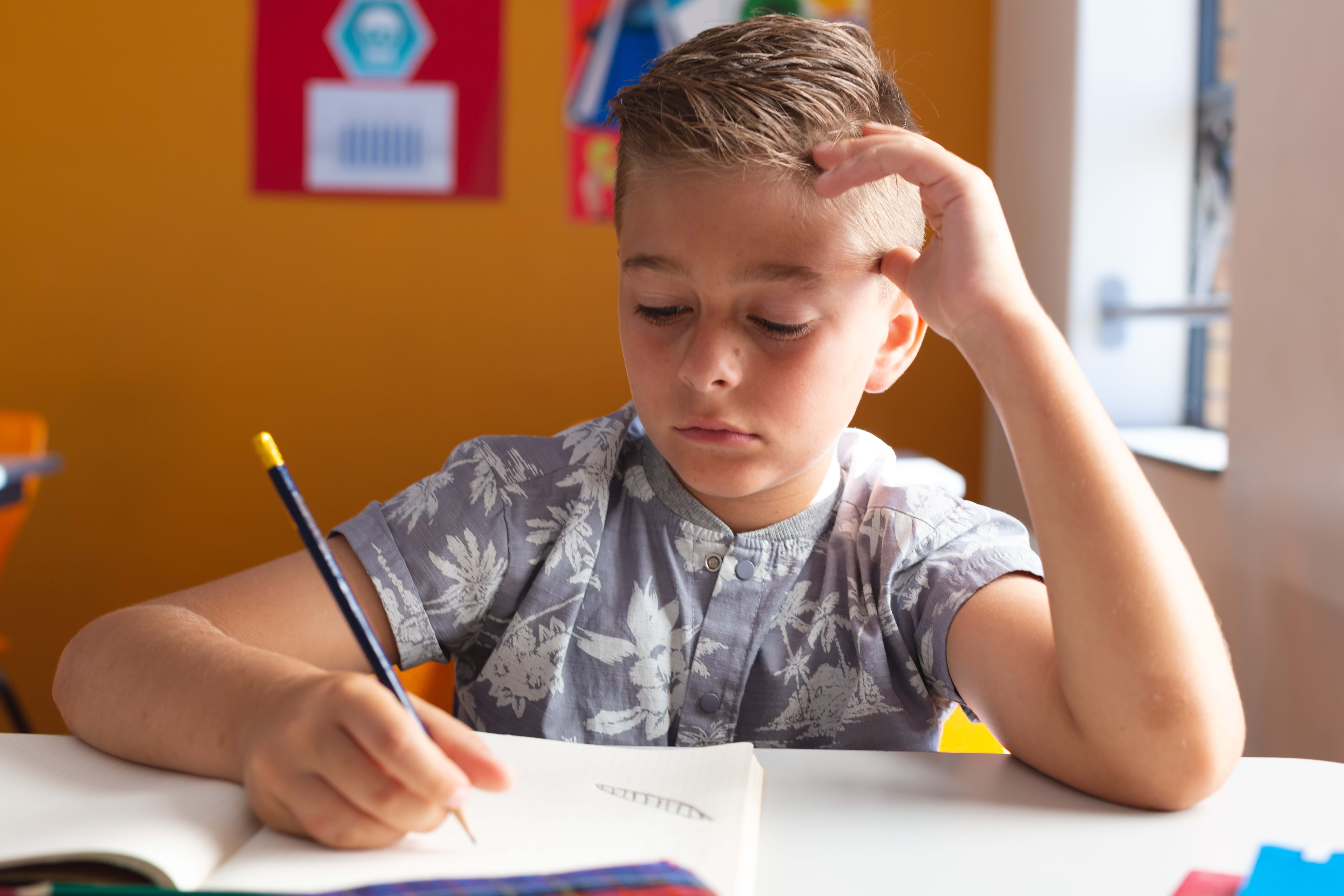 The impact of the data

As the Term 4 results were reviewed, Nick saw some patterns emerging that would lead to a radical reworking of the organisation of the school.

“We got to our final board meeting of the year and at that stage we only had two classrooms open. We didn’t have our third one operating as we’d lost children off roll, and therefore didn’t have the state funding for a further teacher for that classroom.

“I presented the PASS results to the Board of Trustees in our meeting and what we found was that there was a large number of children, predominantly boys in Year 3, who were showing a lot of red flags on their PASS profile results. We looked at it in detail, talked to the children, and realised that the youngest students in our senior classroom were being negatively affected by the age difference across the class. Being so much younger in comparison with the Year 5 and 6 children, while still sharing the same routines and the same classroom, was having an impact. Obviously all the work they were doing was differentiated to their level, but we could see that, in their view, they didn’t care about the age difference, they cared that they could see they were achieving lower than the other children around them and that this was having a big effect on their confidence

“So this prompted me to say to the board – we haven’t got enough kids to fully open the third classroom, but we can’t just sit by and watch these children become disenfranchised with school because they are feeling like it’s not a good place to be. The data is telling us that these students are really not happy in school – so we need to do something about it to prevent this affecting their academic performance in the future."

The Board of Trustees listened to the data and gave Nick the go ahead to open up the third classroom and to use it for Years 2 and 3 for core curriculum work. This meant they would need to take on an additional part-time teacher, adding more than 25% to the teaching headcount. They took the decision to fund this teacher from their own school operations grant and out of parental fundraising, with a total cost of around $30,000 a year. This was put in place for the start of the new school year in February 2021.

The effect is already visible

The impact of this decision is already being made clear. Nick explains: “We’re half way through Term 2 now, and the difference is absolutely noticeable. You walk through the school gate and I get parents commenting that the children look so happy. In the classrooms, the children are completely focused on their learning and there’s a real buzz in the air.

“The PASS surveys are coming back with much improved results – so I can already see that 100% it’s making a difference."

Nick shared some of the PASS scores for the 2020 Year 3 boys who were being most affected (see the table on the right – the higher the score the more positive the children’s attitudes). The data shows a significant uptick in scores that has been achieved rapidly in just a 4-month period. This has given Nick both reassurance that they’re on the right track, but also provides benchmarked data that he can show to the Board of Trustees as validation of their decision.

Parents across the school are also extremely happy with the changes that can be seen. The hope is that the number of children on roll will grow to allow the third classroom to become state-funded, but in the meantime the Parent-School Committee is contributing to the cost of the additional member of staff through various fundraising initiatives. 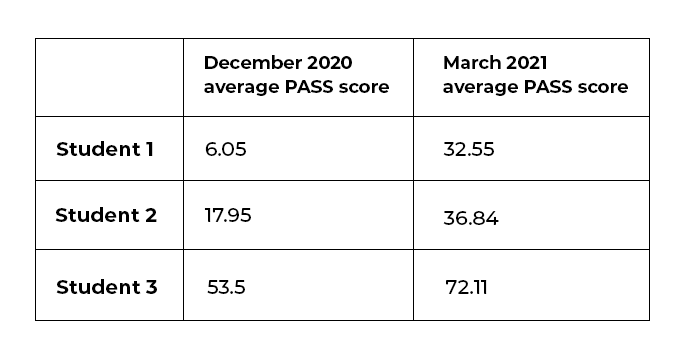 The survey also supports the school with individual insights, guided by the PASS intervention strategies that are provided for each of the PASS factors.

Nick explains: “We wanted to know what the children were concerned about – and never assumed that we knew everything about each child, even though as a small school there is obviously a high teacher-student ratio.

“We used the PASS interventions to support professional development work for the teachers and to establish a wellbeing programme. By looking at the data we could pinpoint particular questions in relation to what the data was showing us, that we could then discuss with individual children to tease out more information. This facilitated some quite difficult conversations, but allowed us to shine a light on issues, discuss things with parents, and put in place external support where needed."

The school are also using the PASS results to inform a project around resilience that is helping the children to deal with any feelings of failure. The PASS measure for perceived learning capability is particularly useful here, as it offers the chance to explore a student’s feelings of self-efficacy and can reveal warning signs of demoralisation and disaffection.

Nick explains: “The perceived learning capability of some of the children were lower than we'd like, so we took the opportunity to look at the vocabulary around this and created a graphic that would be a visual aid for the students. We give them tools such as "When I'm feeling stuck what can I do?" and are working towards us as teachers having coaching conversations with the children, daily.

“The survey results come out often in our staff meetings, so the teachers are referring to them regularly – the data is very much front and centre of what we’re doing."

The school is currently delivering PASS surveys each term, to allow the insights to continue. They are also planning to administer their second CAT4 and NGRT tests in October and will triangulate the data between PASS and CAT4 to gain even more information.

Nick explains: “I think there’s still potential for us to use the CAT4 data in more detail – so one of my next areas of development for the school is improving how we use that data and how it combines with PASS. I’ve recently completed Matthew Savage’s Data Triangulation course, which has given me great support for looking at the use of student-level data to boost wellbeing and personalise learning.

“We’ll carry on doing PASS each term for the time being, as it really lets us get a snapshot of the changes that are happening – and as they only take around 20 minutes to complete and the results are quick, they’re not hugely time consuming."

With the dramatic improvement in student wellbeing seen from the introduction of the third classroom, the school are confident that they are moving in the right direction, led by the data.

Nick concludes: “If you can’t get your school to be a place where the kids feel safe and happy, you’re doomed to failure – so you have to address the children’s attitudes to school, first and foremost. If you can get a positive culture in your school, then kids will come and soak up that culture.

“The feedback we get from people visiting the school say the most positive things about Kiwitahi. It’s really fulfilling to know that we’ve got to a place where the school has a good name, and a lot of that is down to us reacting to information that we’ve got from the PASS surveys. Otherwise, we would be blinkered, driving blind and trying to fix problems that we thought we needed to fix rather than knowing we are dealing with the right areas." 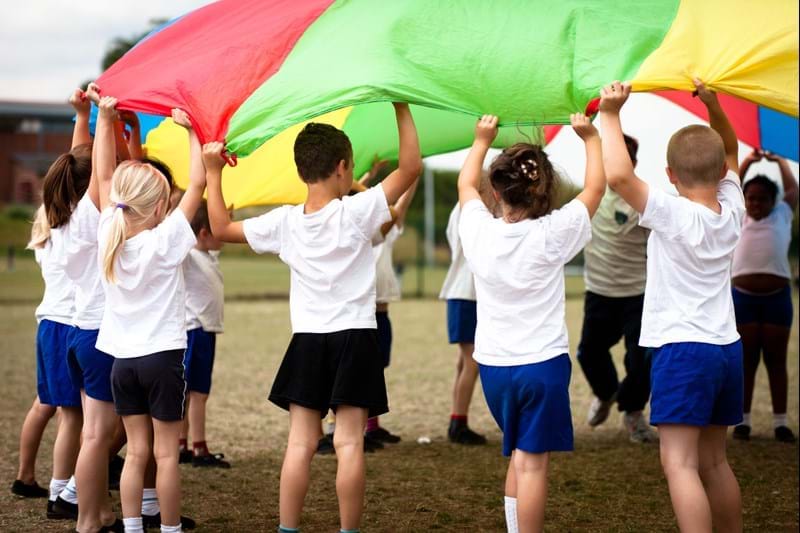